Hey there! It would appear that I kinda jinxed it in my last post, when I said that the COVID-19 pandemic seemed to have been coming to an end. Every day, numerous countries report record numbers of infections, restrictions are being put back in place, borders are closing down again… it’s a déjà vu and not the good kind. That’s not to say that coronavirus is the only problem the world is currently facing – on the contrary, the entire year of 2020 feels like several plots of apocalyptic and post-apocalyptic stories mashed together.

Speaking of stories: the first of the two short pieces that I wrote in/translated into Czech was published in the September issue of XB-1, the Czech magazine of Science Fiction, Fantasy and Horror. The story, entitled “Férovej obchod” [“Fair Trade” in English], sees its main protagonist, Ray M. Holler, up to his neck in trouble with some very unpleasant criminals, although this time around, it may not entirely be his own fault. The English version hasn’t been published anywhere, but I have plans for it – I’ll share them with you in due time.

In the meantime, enjoy a sneak peek of the story below and take care!

My head snapped back as a fist the size of a bowling ball landed on my chin. It belonged to easily one of the largest human specimens I had ever had the pleasure of encountering. The guy was by my estimations at least two meters ten and a hundred sixty kilos of muscle and fat, and unfortunately for me, very proficient at punching stuff. I had a feeling that even if I weren’t currently tied to a pillar and could actually put my hands up, I’d still have ended up beaten like a schnitzel.

Another question, another punch. This time he was aiming straight for my nose, so I tucked my chin a fraction of a second before the impact and let his knuckles connect with my forehead. It was a feeble gesture considering the entirety of my current predicament but the giant had already caused me so much pain that I just really wanted to return the favor, no matter how futile it seemed in the long run.

I expected him to yelp in agony–frontal bone of the skull is considerably harder than any of the bones in the hand and the wrist so you can do the math–but he didn’t so much as flinch. Instead, he laughed amusedly, grabbed me by the hair and gave me a good old open-palmed slap on the cheek. Ironically, this hurt more than any of the previous punches and I felt a tooth loosen.

The guy let go of my hair and stepped back, but not too far, staying within reach of his meaty paws. He hadn’t done so because of my plea, of course, or of his own accord–as you could have probably guessed, he wasn’t exactly the one in charge. That particular role belonged to another individual in the room who was also the one supplying the questions.

Vebhod walked up to me, his face a mask of barely concealed rage. Next to my torturer he appeared grotesquely small, like a child or an oversized doll. Granted, he was a Liktonian, and they were generally smaller than humans but even for their standards, he was a bit on the shorter side. That, however, certainly hadn’t stopped him from pursuing his dreams and becoming an interstellar asshole.

“Yes?” he gritted through his teeth and looked me straight in the eyes.

I looked away and spat the broken tooth along with some blood out onto the floor.

“What is it that I am supposed to answer?” I said with a fake perplexed expression. “You are asking too many questions. I am confused.”

Hello, everyone! The horrible epidemic seems to be slowly coming to an end (at least in my part of the world), the summer is just around the corner (again, in these latitudes and longitudes – sorry, Australians!), and I have another piece of news to share with you. My short story “What Used To Be Mom” was published in Bewildering Stories (issue 858), an online magazine of speculative fiction with a long tradition.

Coincidentally (I finished writing it a year ago), the story takes place in a contemporary world plagued by a sort of pandemic – one that is pretty much unlike anything anyone has ever seen and also one that is one hundred percent (un)deadly – I know how this must sound but it’s NOT about zombies! Have a look at it here and let me know what you think!

Till next time, stay safe!

Hello, cyberspace wanderers! I hope that everyone is well and managing to stay one step ahead of the global pandemic. The current situation feels unreal, yet to me, as a science fiction author, there is something awfully familiar about it – and I bet that many of you perceive it the same way.

Anyway, it has been a while since I posted anything here so I figured that an update, albeit a brief one, was due. At the moment, I am working on two projects, one of which is a novelette featuring our good ol’ R. M. Holler (you may remember him from Making Your Own Luck and Reunion). As for upcoming publications, I have three short stories lined up to appear in print (or online) so far: the first one in June in Bewildering Stories; the rest later this year in XB-1, the Czech magazine of Science Fiction, Fantasy and Horror. You guessed right, I wrote those two stories in my native language which proved to be harder than I thought it would be, let me tell you, but more on that (sometime) later!

At the beginning of this month, a short story of mine entitled “Of Ships, Crews And Chance Encounters” appeared in Theme of Absence. This is my fifth publication in the venue. The piece features a somewhat sentient ship that is forced to confront the reality of suddenly losing her entire crew. The way she does just that might surprise you… but that’s all I will tell you about it. Read it, think about it, and let me know in the comments whether or not it was your cup of coffee. Btw. you can also take a look at an external review – many thanks to 9siduri for a thoughtful analysis!

Last week, my flash fiction “Malfunction” (published in AntipodeanSF in January 2019) was featured in one of the latest episodes of the AntipodeanSF Radio Show called Altdorfer. All props to the hosts – they did an amazing job narrating it!

Since this is slowly turning into a long-winded essay, I’ll stop here.

Take care of yourselves and I’ll see you soon(-ish)!

Hello and a Happy New Year! What better way to kick off the next decade of the 21st Century than with a publication in AntipodeanSF, the fantastic online speculative magazine from down under. “Dear Humans, Your Rent is Due” is a quick piece of flash fiction (I know, I know, I am impatiently waiting to have something longer out there again too) featuring not-so-benevolent aliens and our beloved humanity in a situation which can only be described as difficult.

Since both my fiancé and I are currently tenants, living at the whims of our landlord (that tend to reflect in the rent amount), writing this piece came quite naturally. You can give it a read here and while you’re at it, check out the other brilliant stories in the January issue.

Hey there! 2019 seems to be the year of flash fiction for yours truly – my newest piece entitled “Going With The Flow” was published in the Short Short Story Issue 3 of the Four Star Stories magazine. So what can I tell you about it? Well, it revolves around time travel to a not so distant past and tackles a very common trope – just not from an angle that you might expect which, hopefully, gives it a refreshing taste.

Anyway, give it a read here and comment below (should you choose to). I should get back to working on a longer form!

Hi! I am excited to let you all know that my newest flash fiction “Better Than A Shock Collar” was published in Theme of Absence last Friday. This marks my fourth publication in this venue and fifteenth publication in English overall.

The story is a short one (just under a thousand words) and it features one of Internet’s most beloved creatures – just not in a role that you might expect from it. You can give it a read right here, and as always, if you find it to your liking (or even if you don’t), please leave a comment down below. 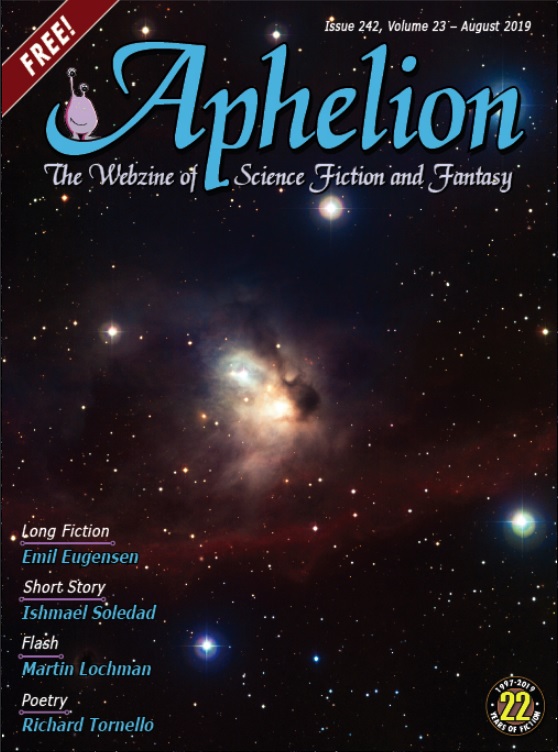 Hello, everyone! While I have been enjoying the sun, the sea, and (unfortunately) an occasional jellyfish on the beautiful island of Vulcano – I most definitely recommend a visit there btw.! – my flash fiction piece “What They Don’t Tell You About Time Travel” was published in the August issue of Aphelion: The Webzine of Science Fiction and Fantasy. This is my fourth publication in this fantastic venue and I am proud to be featured on the cover of this particular issue.

“What They Don’t Tell You About Time Travel” was originally written as a drabble and its first draft was accepted for publication in Martian: The Magazine of Science Fiction Drabbles but due to the venue’s untimely demise at the beginning of this year, it never saw the light of the day. I decided to rewrite the piece and expand it into flash fiction.

Anyway, you can give the story a read here, and if you wish, comment on it directly in Aphelion’s online forum or down below.

Hello there! I am happy to let you know (with somewhat of a delay) that my short story “Lost and Found” has been published in the July issue of a brand new speculative fiction magazine The Weird And Whatnot. The issue is available on Amazon in both digital and print version so if you’re old school like me and you prefer the feel of an actual paper, you can go get yourself a black-and-white, or a full-color copy.

The story itself features a version of a classic SF trope of the first contact between humans and an intelligent alien civilization – but with an ending which to some of you might be all-too-relatable!

I hope you’ll enjoy the read and as always, your comments are most welcome.

Hello, everyone! I am pleased to let you know that my flash fiction piece “Coming Closer” was recently published in Asymmetry Fiction. Considering the rejection rate of this venue, I am especially proud of the publication. About the story itself: do you remember the story on ‘Russia’s most modern robot’ which stormed the media in late 2018? The one where the ‘robot’ actually turned out to be just a regular guy in a very elaborate costume? Well, I took the idea and turned it inside out – and that’s all I am going to say. You can read the story here.

Let me know what you think!

My short story “Have You Ever Not Seen The Rain?” was published in Theme of Absence a couple days ago (I am currently on vacation in Poland with a rather inconsistent internet access, hence why I am letting you know here only now). This marks my third publication in this venue. I got the idea for the piece one Sunday last autumn when the weather was particularly unpleasant; I was at home, looking at the constant downpour outside, and an unsettling question popped up in my mind: “What if it never stopped?” Of course, while the neverending rain and its implications for people’s lives is the strongest theme in the story, it isn’t the only one – but the rest you’ll need to find out yourselves. Have a read here and let me know what you think.